Rolling down the Jeep’s windows, I inhaled the fresh mountain air with its evergreen essence.

Too many hours spent at the office, pungently scented with ‘au de magazine ink’ can damage the soul. The antidote now poured through the windows, along with the vibrant chorus of chirping birds as woman and dog rounded curve after curve on the road to Idaho City.

Easily distracted, for weeks, I’d been looking for the perfect writing getaway. Article assignments, editing multiple books, ringing cell phones,well-meaning family, friends, and Facebook…add up to personal pursuits put on the back burner.

I had a book to finish writing.
Sequestration was the only way.

Packed into my vehicle was a sleeping bag, cooler, camp chair, emergency chocolate, and a hyperactive Weimaraner. I had just under two days to do what I'd been unable to in the past two months…authentically write several more chapters, and compile what I already had.

Past Idaho City, I squinted into the sun at mile markers 42, 45…and finally…46. The first driveway beyond the marker had a metal gate and a sign that said, “Property protected by a United States Marine.” On the opposite side stood a somewhat ornate yurt. Opening the gate, I felt like a cowgirl on the ranch, getting more country and less city by the second.

Locking it into four-wheel drive, I gave it some gas for a run at “Loretta Lane”, which went up the hill. The dog made her way onto the front seat, frightened of the bumps. I remembered this particular pet had not yet gone four-wheeling with me.

Forest gave way to common area with gazebo and picnic tables near a homemade, wood-heated hot tub. A potable water spigot stood nearby, just a stone’s throw from what had to be the favorite feature of many, an outdoor shower. If you’ve never taken a shower out-of-doors, you surely haven’t lived. 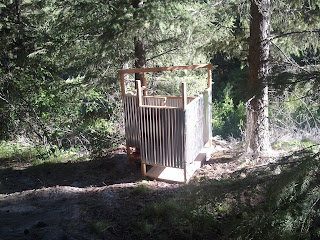 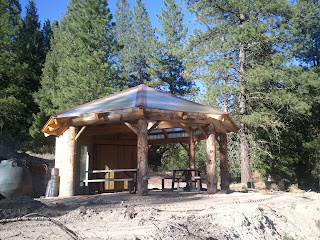 A 20’x17’ wall tent stood majestically overlooking it all, complete with walkaround deck, a barbeque, and deck chairs. It stood crisp and white against a background of sloping earth and trees. This was my home for the next two nights. 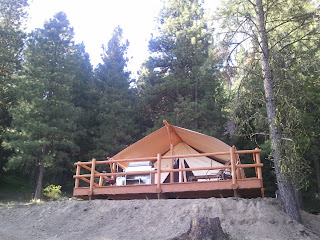 Another short climb to a parking spot, where I parked and quickly unloaded dog, sleeping bag, and vital chocolates.

The dog immediately went into critter-hunting mode while I completed an easy set up. Inside the tent were two couches against one wall and two cozy padded recliners, each facing an entrance. A kitchen area was against the other wall, with table, four chairs, and a heat-producing wood stove in the corner. Securing front and back flaps, the afternoon light and air flowed through the spacious tent, awakening the creative senses. This was the perfect place in which to write. 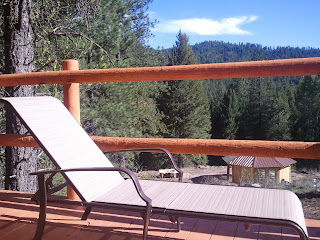 With so many gorgeous locations to park ones’ self, there was only one me. The soft lounge chairs, overlooking the now-vacant common area? The cushy, over-sized chairs inside the tent, with their gentle cross-breeze? The winner: a hillside camp chair near the free-standing fire pit, close to forest trails and featuring the adjacent mountain views, just the spot to for watching the sun go down, and the ideal venue in which to ease back into writing after an extended hiatus.

The light wind, water’s movement in the creek below, buzzing bugs and effusive chirping of birds as the day came to a close, and the occasional snuffle of my dog on the hunt were the only sounds present. No one asked what was for dinner. No one could call or message me.

I finally began to write.

Twenty minutes later I made lemon-ginger sun tea in a jar and set it on the deck, anticipating late evening sipping. I moved the deck furniture around. I made up a couch for bedtime, though it was still afternoon.

The writers’ curse is this: to be thinking about writing 24/7, then distracting self to avoid actually doing it. I am a true writer that way.

This I said out loud to not the dog, who was off on her own quest. It was a direct command to a mind that tended to wander.

Looking over my material, I realized how far I had yet to go before completing the book manuscript. Although planning to use past newspaper and magazine articles for the skeleton, the functioning guts were missing. I frantically began jotting notes, pausing only to stand, stretch, and take deep gulping breaths of the open air.

“If we could bottle this stuff,” I thought somewhat distractedly, “We’d make millions.”

The dog busily explored the entire complex, returning about every thirty minutes to check in. Too soon, the sky turned a deeper blue, then gray, then a glorious orange-y, red and pink. For the millionth time, I marveled at an Idaho sunset.

Writing until I could no longer see, I retrieved a lantern from the tent and read a book for a couple of hours on the distinctly silent hillside.

On this mountain, it seemed to take longer for the sun to go down. By ten there it was still fairly light, but knowing I had hours of writing to tackle the next day, I turned in.

The dog, however, did not, proving once again she really was an obsessive-compulsive, as  long suspected. Refusing to cease with critter hunting, she was duly confined to the Jeep for the night.

The gentle wafts of air combined with nearby water sounds lulled me into several hours’ sleep on the comfortable couch.

With an early sunrise and so much nature surrounding me, I rose sooner than anticipated, sipping more chilled lemon-ginger sun tea and munching a granola bar while observing the sky’s transforming colors. Granted freedom, the dog resumed her hunt as I grabbed notebook and pen to continue writing.

Not being able to resist the cool morning air and light playing on the trees, we toured each cabin site as the dog circled the yurts in confusion at the unusual building shape. One yurt had glass bottles built into its walls. I peeked inside, seeing how they infused the exterior with colored light. Each area was equipped with a grilling device or fire pit, but the ‘bottle yurt,’ my pick, had a fire pit near a mini waterfall that emptied into a small pond. 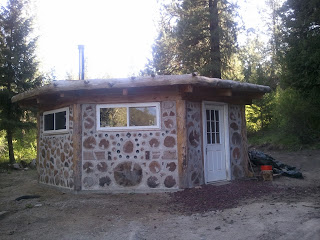 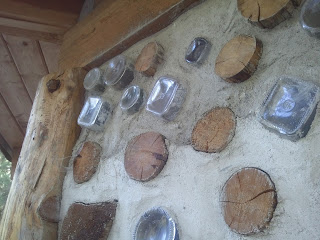 The dog galloped up the logging trails, looking back at me in a mocking way. I knew what she was thinking, "I have four legs, you have two...and you're slow."

We climbed higher, crunching on pine cones and the cushion of pine needles. 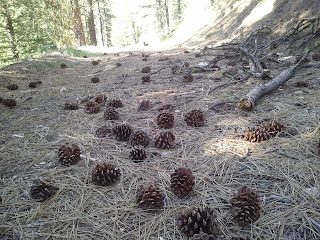 When returning to writing, I periodically moved around to every picnic table at all three cabins. At one p.m., I lunched on half of a Southwestern turkey-bacon wrap at the sunniest table I could find. The dog, disapproving of change, returned again and again to our tent site, trying to induce me to follow her.

I ended my writing tour back at the camp chair, where I did the bulk of my work. At 4pm I went through the book’s outline, realizing with a grin that I had articles for the last three chapters at home. By then it was 4:29, and I was basically done.

“I’m done!” I said out loud to no one but the dog, who didn’t even turn around, “I can’t believe I’m actually done.”

With the rest of the evening to play, I whistled to the dog and we boarded the Jeep, exited the big metal gate, and rolled over the mountains, stopping to eat occasional snacks, explore, and take photos at dusk.

I watched the sun go down from Lowman that night, then we drove back to camp.

In the morning, cleanup was easy. Leaving things ‘better than I’d found them’ was a challenge, since camp had been in good shape upon arrival.

I’d accomplished more than imagined and bowed my head in gratitude. When I looked back up, there sat the dog, tail wagging excitedly.  She leaned her head to the ground, nudging something with her nose. It was a dead mouse. We were both conquerors.

The dog whimpered as we drove down Loretta Lane, past the common area, the outdoor shower, and the fire-heated hot tub that I hoped to experience at a future date. I inwardly whimpered, too, at the prospect of leaving, unready for noise and humanity's bustling movements again.

Mores Creek Cabin Rentals had been the ideal place to go on a weekday for my writing sequestration. It would also be the right place, I thought happily, for an overnight, unofficial, wildly joyous book launch party.

What better location to introduce the “Appetite for Idaho” series than at an Idaho wilderness cabin retreat?

Thanks, Mores Creek Cabin Rentals, for a memorable, restful, and productive stay.

And visit the Appetite for Idaho Facebook page, with new stuff to do posted every weekday!
Posted by Amy Larson at 9:41 AM No comments: