I usually know when someone's pulling my leg.

"---and then he told him, 'Turn me over, I'm done," said Chef Brian Garrett, as he leaned over the high, high window of the Saint Lawrence Gridiron's food truck. He was giving us an explanation of his business's name.

"---and that's why he's the patron saint of cooks and chefs," the rolling restaurant owner concluded.

I looked over at my foodie friend, Sarah, who'd randomly agreed to join me for lunch. She wasn't grinning. I looked back at Chef Brian, but his face gave nothing away. On the tip of my tongue was a big, 'Yeah, right,' but I didn't say anything.

We were at the corner of 11th and State street in Boise for lunch, the Gridiron's location of the day. The flow of customers leading up to the window never ceased; a very good indication of the food quality. 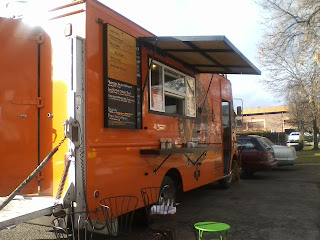 We assessed the menu board. What was that? Could it be?

'Poutine' jumped out at me. My Canadian friend Vaun had been talking about it for years. Fries, a special gravy, cheese...what's not to like? 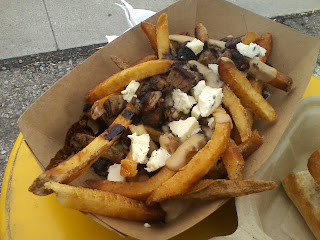 Sarah, who'd never tried poutine either, said she'd split an order with me, as long as we both ordered a sandwich so that we could sample not just one, but three menu items in one shot. We're frequently strategic like that.

I got the Boise Cheese Steak, and Sarah ordered the Smoky Loaf Sandwich to go with our gravy-covered fries. 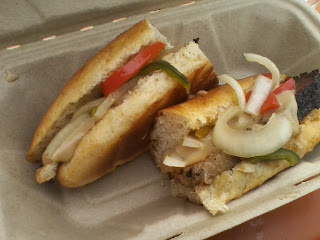 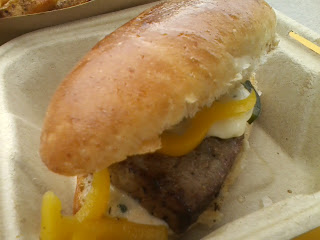 Intending to sit at the cafe table out in front of the Gridiron, to soak in the whole experience, we found that we failed miserably at it. We made a beeline for the shelter of my car.

"I enjoy food much more when my teeth aren't chattering," said Sarah. I heartily agreed. Now, for the task at hand. Crispy fries, 'Chinden Sauce', drunken cheese sauce, brisket and Gorgonzola cheese sat between us on the console. Civilized dining was tossed to the brisk Idaho wind as fingers were used on this dish.

"What is that darker sauce?" I asked, between bites, "It's got so much depth, it's hard to tell. Drippings? A condensed au jus? I just don't know."

"...It tastes almost like it's got balsamic vinegar in it," said Sarah.

So different, so difficult to pin down.

My Boise Cheese Steak sandwich had a spice-rubbed brisket, drunken cheese sauce and pickled vegetables. The meat was tender, and the spices had a kick I appreciated. I thought I detected some chili powder in that rub.

"...Too dry," we both said at the same time. Egads, we're almost acting like food critics now.

There were no leftovers, it was all happily devoured. A meal like that on a chilly Idaho afternoon is just the thing for culinary appreciatives.

We snapped a few photos of the food truck, then picked Chef Brian's brain. 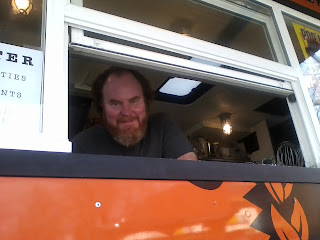 I once again had the uncomfortable feeling we were being had.

"What was the darker sauce on the poutine?" I asked, wanting to change the subject.

"It's got a fermented bean paste base," Chef Brian told us. I looked at Sarah, who'd been on sort of the right track when she'd mentioned balsamic vinegar.

"I borrowed that from Asian cooking," he added.

How clever to cross lines of culture in culinary creativity. I love it when chefs do that. And it was tasty. Who knew I'd be eating fermented bean paste on this day...and like it?

Chef Brian confirmed that the brisket had ground chili powder in the rub, but offered us no further clues as to the other ingredients. He just leaned over the high, high window with a knowing grin on his face, not divulging.

We took a few more pictures and parted with a friendly wave.

Later, I asked Sarah, who'd studied religion extensively, what she thought of the barbequed saint story.

"It sounded like a typical saint story/myth. But I'd definitely want to check it out," she replied.

Then, I saw it. The story of Saint Lawrence, martyr.

It seems that the Prefect, having a fit of anger sometime during the year 258, sentenced Saint Lawrence to a torturous death by gradual, sure burning. Saint Lawrence was tied atop a grill of iron and slow-roasted. The story has it, however, that through his love of God, he was protected and didn't feel the pain. He was comfortable enough to have said to the nearby judge, "Turn me over, I'm done on this side!"

Chef Brian hadn't been making it up, it was all true.

And now, like me, I'll just bet you'll never forget the name of Saint Lawrence for as long as you live.

Which is good, because for some of the most incredible food on four wheels you've ever had, St. Lawrence is a name you're going to want to remember. 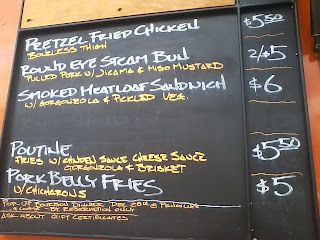 And visit the Appetite for Idaho Facebook page, with new stuff to do posted every weekday!
Posted by Amy Larson at 2:31 PM