Hinsel Scott is someone who is hard to explain with mere words. He’s an interesting mix of so many things. Businessman, friend, social media and PR genius, graphic and web designer, and chief of reciprocity. I have a picture in my mind of Seinfeld’s Kramer, (given all of the pies he has his fingers stuck into) but in Hinsel form.

I’ve learned not to be surprised when some new Hinsel facet emerges, but when he mentioned gold panning and mining, I just had to ask. 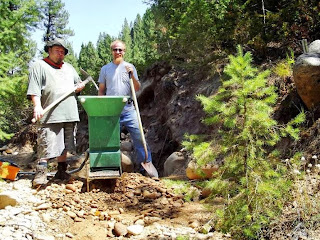 It seems this Southern-born boy, an Idaho resident for over ten years now, thinks there’s gold in them thar hills. No…he knows there is.

His area of origin was flatland, without a ton of mountains, so the fascination for rocks and digging was already present, then fed by a friend in the process of building his first little gold dredge. That friend invited Hinsel to join him for a prospecting trip. Up in Boise County, Hinsel was shown how to pan, and found his very first flake that day while just kicking around at Grimes Creek.

“My first piece of color was really small, the size of a grain of salt, but it didn’t take long to find it.” 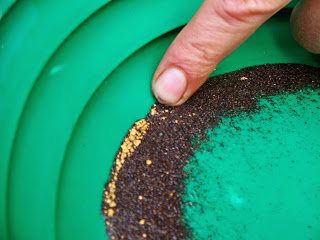 Hinsel got bit by the gold bug.

“I was pretty excited when I saw the real thing for the first time,” he says, “That’s happened to me, and everybody I’ve ever taken out. They see all of the sparkly, shiny stuff in the creek, think it’s gold and that they’ve struck it rich. But most of it ends up being either mica or iron pyrite, Fool’s Gold. Once you see the real thing, you’ll know nothing else in the river looks quite the way gold does.”

Hinsel passes on Gold Panning 101 tips he got from his friend, and things he’s learned himself during his own five years of prospecting:

“Always remember that gold’s going to be about nineteen times heavier than anything else in the river. It’s over nine times heavier than lead, so concentrate on taking your dirt, your material, and getting it as liquefied in your pan as possible with water. Don’t let it ‘rock up’ on you. When it’s all liquid and aerated, the gold naturally drops into the bottom of your pan, due to gravity. Pick out the bigger rocks, because if you have a ping-pong sized rock in there, despite gold being so heavy, a small flake of gold can get displaced by that bigger rock, just because of its size. Keep it liquid and work the material back and forth, so the water washes the lighter material off the top. What’s left at the bottom is the heavy black mineral sand…and gold.”

He adds, “Take a shovelful of dirt, pan it out and work it down to just a couple of tablespoons. That’s where you’ll start to see your color show up.” 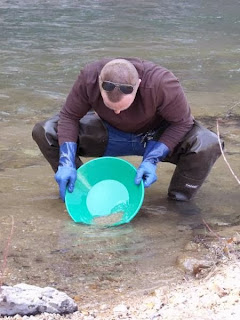 Although looking for gold of any kind, Hinsel says he prefers going for the gold flakes, yet he wouldn’t turn down a nugget if he found one.

“We didn’t find our first actual nugget until last year,” he told me, “It’s not like in the movies where you see people pulling fist-sized nuggets out of the river. Nuggets are rare. For the prospectors back in the old days, and these days, too, your bread and butter’s going to be the fine gold, the ‘flour’ gold. You can pan and sluice, getting the small stuff all day long. That adds up a lot faster than any nugget you might find.”

I wondered how much money we were talkin’ about, here…

When a nugget was located last year, weighing in at around a quarter of an ounce, a lot of hooting, hollering, and high fives were exchanged.

“We’re definitely making more than enough to pay for beans and gas,” he happily states. 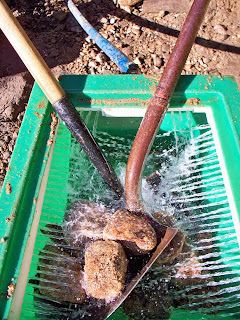 How severe is this particular case of gold fever?

“I’d pretty much go up every weekend if I could,” Hinsel admits, “Just about every weekend during the summer months, I head for the hills, with a few days off to go up here and there during the week.”

As in the old gold rush days, Hinsel is subtle about the exact location of the claim.

“We’re pretty secretive about specifics,” he says, “People ask where we’ve been going to find all of that gold, and we’re sort of like, ‘Oh…you know…somewhere around Idaho City’, or, ‘somewhere in Boise County.’ You don’t want everybody knowing where your sweet spot is.”

It’s the opposite when it comes to being an evangelist for the hobby.

“As far as letting people know I’m into it, yeah, I’ll be glad to talk about that. When my dad visited from the South a couple of years ago and I took him up, he caught a little of the fever. It was all he could talk about for the whole next year,” Hinsel relates.

Hinsel’s dad isn’t the only one. Thanks to the appearance of tv shows like Discovery Channel’s “Gold Fever” and “Gold Rush”, hunting for yellow ore is more popular than ever. The shows were what fueled Hinsel and his friends’ already-present prospecting passion.

“We watched the shows during the week, which sort of fanned the flames, then got all excited to go out on the weekends,” Hinsel says. He credits his friend, Trent Starkey, saying that he wouldn't be getting out nearly as much, or finding as much 'yella' stuff without him.

Trent started the business Idaho Gold and Gem Outfitters, which Hinsel and another mutual friend are also now a part of.

These days, Hinsel and his ore-seeking associates are hard core miners, with a claim and all of the legit, legal paperwork. They now run a few ‘high bankers’, which are portable sluices and dredges, and a five-and-a-half inch dredge.

The Gold Prospector’s Association of America is big on getting people involved, with an emphasis on families. The Idaho Chapter of the GPAA is based in Nampa. Once generally hosting an older membership, thanks to the aforementioned TV reality shows, that’s quickly changing. People of all ages are now on the search.

Although a person can pan during just about any time of the year, for most, the Idaho cold is a deterrent. That doesn’t stop Hinsel and Co. from playing in the dirt. During the summer, they plan ahead, filling buckets or Rubbermaid containers with dirt they suspect to be gold-rich. This provides something to sort throughout the long winter months.

According to Hinsel, waiting within just about any river in Idaho sits some type of gold.

And visit the Appetite for Idaho Facebook page, with new stuff to do posted every weekday!
Posted by Amy Larson at 6:49 PM